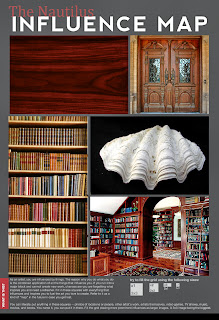 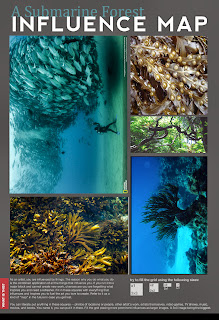 To start, I have created two very basic influence maps, creating broad overviews of my visual inspirations for both chapters. The two chapters describe distinctly contrasting environments and while collecting pictures I tried to keep the colour schemes for each similar (i.e. sticking to blues and greens for the Submarine Forest and more earthy, red tones for The Nautilus.) I think this will help me later on when my sketches become more in-depth and I begin to really think about my colour choices for each scene, it will also help to keep me on track and constantly aware of the environments I'm working on. My next few maps will be much more detailed and varied. 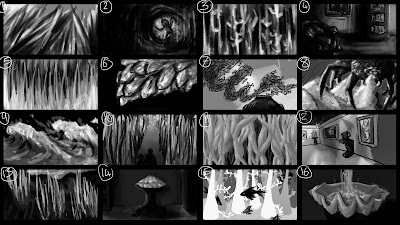 I then returned to the thumbnails I started during our first photoshop tutorial and completed them. There are only a couple of scenes here that I'm really fond of and might take forward to expand on in later thumbnail collections. This is mainly because I was still testing out brushes and settings and so many of these don't reflect my ideas in the way I'd originally planned.